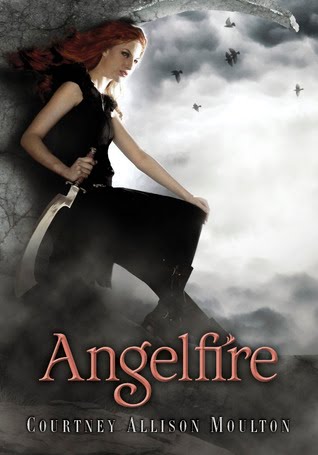 Angelfire by Courtney Allison Moulton is about when ordinary seventeen-year-old Ellie starts seeing reapers—monstrous creatures who devour humans and send their souls to Hell—she finds herself on the front lines of a supernatural war between Angels and the Fallen, and faced with the possible destruction of her soul.

When I was reading this book, it reminded me a lot of Buffy the Vampire Slayer but with ghosts and demons.  If you were and are a fan of that, you are going to love this book.  There was a lot of fighting in this book, in my opinion, a little bit too much.  It was very cool though to have a girl being the hero instead of a guy.  My favorite parts of this book were the interactions between Ellie and her guardian Will.  Throughout the book, Ellie is afraid of losing the person she is and losing her normal life.  These were the moments that felt the most ‘human’ to me.  I am interested in seeing where this series goes in the future.

Afterlife is the final book in the Evernight series by Claudia Gray.  Having become what they feared most, Bianca and Lucas now

face a scary new reality. They must return to Evernight Academy.  But Lucas is haunted by demons, both personal and supernatural and Bianca must help him fight the evil inside him—and find the power to claim her destiny at last.

When I found out that this book was the last in a series, I hurried and rushed to my public library to get the first three.  I really had a lot of fun reading these books.  I zipped right through them.  They had romance and adventure.  Bianca and Lucas are like a Romeo and Juliet story.  They want to be together but because of family circumstances, they cannot be.  They have to fight for it.  It felt that this last book really wrapped up the series in a very satisfying way.  I was pleased at the end.

Both Angelfire and Afterlife are Young Adult books and I do recommend them for older kids.  There is some language and some sexual material-nothing explicit though.

Angelfire is available now in bookstores, on Amazon, and through Barnes and Noble.

Afterlife will be released on March 15th.  That gives you plenty of time to catch up on this series.  You can pre-order it here.

Angelfire and Afterlife get bragging rights!

**I received copies of Angelfire and Afterlife for this review.