“Disney and creative genius Tim Burton (creator of “The Nightmare Before Christmas”) proudly announce the home entertainment debut of “Frankenweenie” arriving as a 4-Disc Blu-ray™ Combo Pack, Digital and On Demand—January 8, 2013. The Blu-ray Combo Pack’s spectacular picture and sound enhances the tale of a boy who uses the power of science to bring his beloved dog back to life … and a whole town faces the unexpected and electrifying truth of what happens when monstrous experiments run wild!”

We LOVE Frankenweenie!  We didn’t have a chance to view it in theatres so we couldn’t wait for this Blu-ray release. My 5 year old son and I watched it together last night and we both really enjoyed it.  It is a very fun and cute story told in an awesome way by Tim Burton.  I am a big Tim Burton fan and this movie just made me an even bigger fan. I love that it has dark elements but not so dark that kids can’t enjoy it, there are also a lot of funny parts and little things added in that will make you laugh. We also enjoyed the bonus features.  I was in awe as I watched the “Bringing Frakenweenie to life” feature.  It is amazing how much went into making this movie and I found the feature fascinating to watch.  I highly recommend watching it.  My son likes the short bonus feature “Captain Sparky vs The Flying Saucers” and was so excited about more to watch after the movie was over.  I also like that they included Tim Burton’s original Frankenweenie short film, it was cool to watch and see the similarities they kept in this new film.  There are great bonus features in this pack!

This is a great movie the whole family can enjoy together and a must have to add to your home movie collection! Frankenweenie is available online and in stores now! 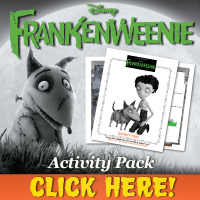