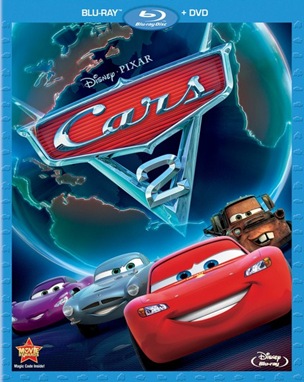 “Star racecar Lightning McQueen (Owen Wilson) and the incomparable tow truck Mater (Larry the Cable Guy) take their friendship to exciting new places when they head overseas to compete in the first-ever World Grand Prix to determine the world’s fastest car. But the road to the championship is filled with plenty of potholes, detours and hilarious surprises when Mater gets caught up in an intriguing adventure of his own: international espionage!”

We all loved Cars 2 when we saw it in theaters so when we received Cars 2 on Blu-ray and DVD Combo pack we couldn’t wait to watch it again.  This is such a fun show.  Bug LOVES it and has watched it over and over since it came.  He especially loves the action and spy elements of the movie.  Another great thing is the 2 shorts that are included in the bonus features. Toy Story Hawaiian Vacation & Air Mater. They are super adorable! It is a must have addition to your family’s movie collection!

Check out these fun Cars 2 Activities and Recipes:

Right now you can get a Printable $5 off coupon for Cars 2 5-disc Blu-ray Combo Pack. 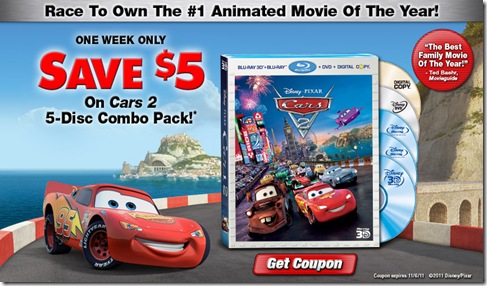