CELEBRATE THE LEGENDARY WORK OF DR. SEUSS WITH THE RELEASE OF HATS OFF TO DR. SEUSS COLLECTOR’S EDITION on Blu-Ray and DVD 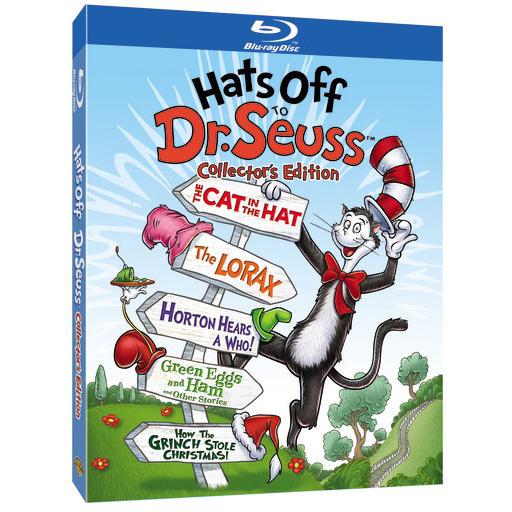 Prepare to enter into the magical, whimsical world of Dr.Seuss with Warner Bros. Home Entertainment (WBHE) release of Hats Off to Dr. Seuss Collector’s Edition, a must-own collection featuring five of the author’s most beloved animated classics, which are available together on Blu-ray™ and DVD in deluxe editions for the first time. Set for release on February 19, 2013, this compilation will include such all-time-favorite TV specials as The Lorax, Green Eggs and Ham and Other Stories, How the Grinch Stole Christmas!,The Cat in the Hat and Horton Hears a Who! along with loads of original enhanced content. All five specials are re-mastered for brilliant picture and sound quality.

WBHE pays tribute to Theodor Geisel, known to most as the beloved Dr. Seuss, with the release of Hats Off to Dr. Seuss Collector’s Edition. For the first time, the studio is bringing together some of the celebrated author’s most cherished television specials in one, must-own-collection. Throughout his distinguished career, Dr. Seuss wore many different hats and captured the hearts of many by sharing his multifaceted talents as author, sculptor, political cartoonist, artist and visionary. WBHE celebrates Dr. Seuss’s legacy by putting together the most comprehensive collection of his animated television specials to date.

Included in the set, is a highly collectible booklet that showcases rare artwork from Dr. Seuss and a sneak peak at photos showcasing some of his hats from his secret hat collection, which illustrate the author’s appreciation of classic humor and love of art.  The original artwork featured in this booklet can be enjoyed by consumers at “Hats Off Exhibitions,” which will be held at select galleries nationwide from January to December 2013.

Dr. Seuss’s drive to create, compelled him to wear many hats throughout his brilliant career. What better way to celebrate his multi-layered genius than with a collection that offers fans a deeper look into his exceptional body of work?

“Dr. Seuss and his work are cherished by generations of fans,” said Mary Ellen Thomas, Vice President Family & Animation Marketing and Partner Brands. She added, “He has touched the lives of both adults and children with his unforgettable characters and his uplifting, inspiring, and consciousness-raising stories. We’re delighted to celebrate Dr. Seuss’s remarkable legacy with this beautiful collection. Hats Off to Dr. Seuss Collector’s Edition is the one-stop, go-to source for some of the most outstanding and entertaining stories in children’s literature.”

How the Grinch Stole Christmas!:

Magnificently narrated by Boris Karloff (Frankenstein, The Mummy) and directed by animation genius and cartoon legend Chuck Jones (Looney Tunes, What’s Opera, Doc?), How the Grinch Stole Christmas! tells the story of the miserable Grinch, who wants to sabotage Christmas for all the Whos in Who-ville.

The Grinch thinks that by stealing the Whos Christmas trees and presents, he’ll succeed in stealing their joy. However, when Christmas morning arrives, The Grinch is taken by surprise when he notices the Whos greet the day joyously singing Christmas carols regardless of the fact that their village has been completely stripped of holiday gifts, decorations and treats. The cheerful attitude of the Whos prompts the Grinch to ponder the true meaning of Christmas and he slowly comes to realize the spirit of the season is not generated by material possessions.  Will the Grinch have a change of heart and consider returning the Whos Christmas gifts?

Dr. Seuss’s The Lorax is the classic TV special that tells the tale of how an enterprising but greedy villain named the Once-ler, strips a forest of its lush Truffula trees, bringing them to near extinction for the sake of profit.

The Once-ler becomes obsessed with the Truffula trees’ potential to make him rich. Bewitched by the beauty of the trees, he greedily chops them down so he can mass produce versatile garments, called “Thneeds” out of the Truffula’s colorful, softer than silk tufts.

The Lorax, an endearing and wise little forest creature, whose job it is to “speak for the trees,” continuously warns the Once-ler that his greed is making him crazy and is causing him to destroy the beautiful Truffula forest, thereby jeopardizing the home of various wildlife including Brown Bar-ba-loots, the Swomee-Swans and the Humming-Fish.

As the trees swiftly disappear, so do the Brown Bar-ba-loots, the Swomee-Swans and the Humming-Fish. What will it take for the Once-ler to realize how much damage he’s caused? Will the Truffula trees become extinct or will there be hope for regeneration?

Green Eggs and Ham and Other Stories:

In Green Eggs and Ham, Dr. Seuss serves up laughs and important lessons. Viewers will join Sam-I-Am and his persistent attempts at introducing a reluctant fellow to a most delectable dish. Their escapades take them across a zany landscape while assembling a cast of characters that only the imagination of Dr. Seuss can bring to life. Will Sam-I-Am convince his new friend to take a chance and finally try something new? Find out in this timeless tale the whole family will enjoy.

Then meet The Sneetches, who teach us that being yourself is the best way to fit in while the story of The Zax reminds us that there is nothing to gain from being stubborn. So bring an appetite for a full course meal of fun that will fill your heart and mind!

Dr. Seuss’s The Cat in the Hat:

Dr. Seuss’s The Cat in the Hat tells the story of Dick and Sally, who are stuck indoors on a dull, rainy day, with nothing to do. Their dreary afternoon takes an unexpected turn when they’re paid a visit by a charismatic, six-foot tall, hat-wearing Cat, who invites himself in to search for his misplaced “moss-covered, three-handled family gredunza.”

Unfazed by the chaos that’s slowly unfolding around them, Dick and Sally are captivated by the Cat in the Hat and his madcap, whimsical ways. They pass the afternoon in sheer delight and don’t notice their house has been turned into a complete mess! That’s until Dick and Sally hear their mother coming home. How in the world will they clean up the enormous mess before she walks through the front door?

Horton Hears a Who!:

Directed by Academy Award®-winning animator Chuck Jones, Horton Hears a Who! brings to life the delightful story of a charming Elephant named Horton, who while bathing in the jungle, hears a faint plea for help coming from a tiny speck of dust drifting through the air.

The plea comes from Dr. Hoovey, resident professor of science of Who-ville, a tiny planet no bigger than a speck of dust, which is inhabited by the microscopic Whos. Horton happily obliges to take care of the all the teensy Whos in Who-ville, proclaiming “after all, a person is a person, no matter how small,” and tenderly rests the tiny speck of dust on a clover blossom.

Horton’s jungle companions however, claim Horton has “flipped his lid.” They enlist the Wickersham brothers to steal the clover from Horton, and arrange to then pass it along to the black-bottomed eagle, who finally drops the clover in a great big patch of clovers over 100 miles wide. Will Horton keep his promise to protect the Whos and search through the entire field to help prevent their demise?

We LOVE Dr. Seuss in our house, and were super excited to be able to review the new Hats Off to Dr. Seuss Collector’s Edition on Blu-ray and DVD. It is super adorable- I remember watching these when I was little! They are totally remastered and look and sound great. My boys were completely enthralled and I love being able to share Dr. Seuss in a whole new way with them! This would make a great edition to any Easter basket! 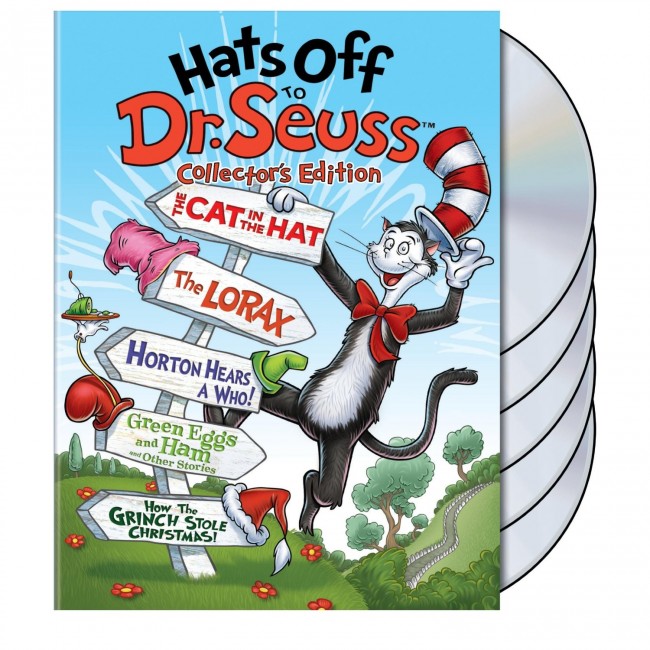 Hats Off to Dr. Seuss Collector’s Edition on Blu-ray and DVD gets Bragging Rights!