All 20 Original Episodes Debut on DVD August 9, 2011 from Shout! Factory

“Hey Arnold!, one of the most beloved animated Nickelodeon series from the 1990s, arrives in stores nationwide for the first time on August 9, 2011, from Shout! Factory. Featuring all 20 hilarious episodes, Hey Arnold!: Season One follows the adventures of Arnold, the original football-headed boy’s life in the big city alongside his Grandpa, Grandma, Abner the pig and a host of other friends and neighbors. Long anticipated by fans, Hey Arnold!: Season One DVD has not been available in stores until now. 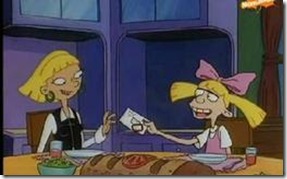 A favorite with viewers and critics alike, Hey Arnold! stars Arnold, a fourth grader who lives with his grandparents Phil and Gertrude, owners of the Sunset Arms boarding house. Each episode finds Arnold in a new, sticky situation, whether it’s helping out a schoolmate with their problems or dealing with his own. Unfortunately, Arnold’s predicaments are often started by Helga, a schoolmate who picks on Arnold and constantly bullies him. However, Helga only pretends to dislike Arnold to hide the fact that she is secretly in love with him!Created by Craig Bartlett as a comic in 1986, Hey Arnold! debuted as an animated short for the Nickelodeon film Harriet the Spy in 1996. Hey Arnold! went on to air on Nickelodeon from 1996 to 2001. The show also aired on "Nick on CBS" from 2002 until 2004.”

I grew up watching Hey Arnold and have great memories of watching it with my little brother and sister.  So I was really excited for the release of the Hey Arnold Season One 4 Disc Set so I could share this show with my little Bug.  He has really been enjoying the show and I love that it has 20 episodes.  Plenty of entertainment for Bug while I work :)  It is so fun to introduce my son to shows I enjoyed as a child.  I am so glad they finally released this one to DVD! 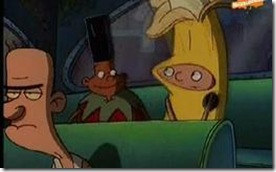 Hey Arnold Season One is Available in stores and online at the Shout Factory Now!