“Since its launch this past February, Disney Junior continues to grow and break all previous records for Disney Channel’s preschool programming! Anchored by hit series, Jake and the Never Land Pirates, cable’s #1 series for Boys 2-5 since its launch and on track to be Disney Channel’s #1 preschool series ever, Disney Junior continues to soar. The show currently is among one of the most co-viewed preschool series, with 45% of moms watching with their preschooler.”-Disney 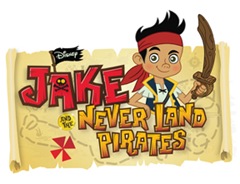 4 year old Bug LOVES Jake and the Never Land Pirates.  It is his favorite show on TV right now.  There are not a lot of “kid TV shows” that I enjoy watching, but I actually don’t mind sitting down with Bug and watching it.  Or listening to it as I cook dinner.  The songs are really fun and get stuck in my head.  I love the lessons it teaches Bug and he learns a lot from watching it.  My favorite thing is how he now says things he picked up from the show like: “Ahoy Mateys” & “I got some Gold Doubloons”.  It is a cute show and I love that Bug enjoys it so much.

We were so lucky to be able to view the upcoming holiday episode early!  The episode “It’s A Winter Never Land!/Hook On Ice," is scheduled to premiere on Friday, Dec. 2 from 8:30-9 a.m. EST/PST.

It is a great episode so make sure you tune in with your kids or set your DVR to tape it.

I am so excited to announce that Disney Junior will be launching it’s own 24 hour channel in 2012!!!  This is really exciting because the main time that Bug watches TV is in the afternoon and I had always wished I could have Disney Junior to put on for him.  Wish Granted!

“Moms have spoken and Disney Junior is listening… We talk to thousands of parents of 2-7 year olds every year. We’ve heard from moms that they want more Disney programming for their younger children made available throughout the day, especially during those later afternoon/early evening hours when they need it most while making dinner and unwinding from the day. The result – a brand new standalone 24-hour Disney Junior channel will launch in early 2012. (The current Disney Junior programming block, which launched in February 2011 on Disney Channel, airs weekdays from 4:00 a.m.-2:00 p.m., ET/PT and weekends from 4:00–9:00 a.m., ET/PT.)”-Disney

For more information on Disney Junior and Jake and the Never Land Pirates, visit www.DisneyJunior.com.