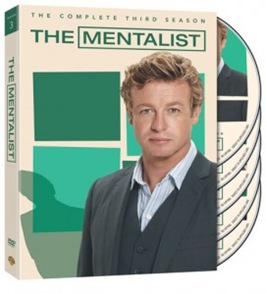 “This season, Red John strikes into the heart of the CBI. Ever since the serial killer murdered Patrick Jane’s family, the California Bureau of Investigation consultant and former faux-psychic has become obsessed with finding the man who destroyed his life. But after a homicide suspect is set ablaze in his jail cell and a CBI agent is later framed as Red John, Patrick realizes his adversary is closer than he imagined. The 5-disc 24-Episode Season 3 of this hit procedural combines crime-solving twists with wry humor that celebrate mind over matter. In settings from gold country to the racetrack to a martial-arts cage brawl, unconventional Patrick uses his unique skills of observation and manipulation to buck the system. And crack the toughest cases.”

“In the Season 3 finale of The Mentalist, Patrick confronts and shoots a man who claims to be the serial killer who murdered his wife and daughter – Red John.”

I have a feeling that this man was not the true Red John.  I feel a plot twist coming with us finding out he killed the wrong person.  I hope that isn’t the case because that would be so sad, Ahhhh the suspense is killing me! I can’t wait to find out…

Do you believe that this man is the true Red John? If so, why? If not, who do you think he is?

Order your copy of The Mentalist: The Complete Third Season on DVD here today: http://bit.ly/rcKZxk!