In Celebration of THE FOX AND THE HOUND’s 30th Anniversary!

TWO CLASSIC TALES OF FRIENDSHIP AND ADVENTURERELEASE FOR THE FIRST TIME ON BLU-RAY™ HI-DEF – AUGUST 9, 2011 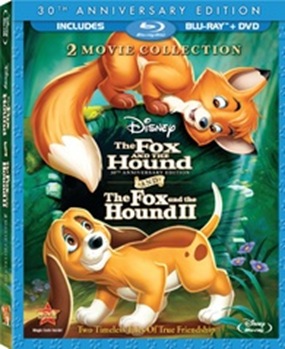 “In the tradition of heart-warming films, such as Bambi and Dumbo, comes Disney’s classic tales that taught us the power of friendship in The Fox and the Hound and The Fox and the Hound 2, in a special 30th Anniversary 2-Movie Collection.  For the first time ever in high-definition, consumers can now experience the brilliant, humor-filled adventures of best friends Copper and Tod in an all-new digitally restored version of the original 1981 film, arriving to stores on August 9, 2011.   Featuring an all-star cast of voice talents, toe-tapping music and fantastic bonus features, consumers can take home two of Disney’s beloved “tails.” The Fox and the Hound and The Fox and the Hound 2, 2-Movie Collection features both movies in a single 3-Disc Blu-ray Combo Pack.  This release provides families with the value, versatility and opportunity to enjoy their favorite movies how they want, when they want and on the entertainment platform of choice – whether it’s in the home, on a portable device and/or in the car.”-Disney 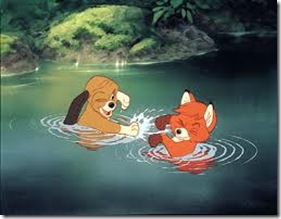 I am a huge Disney fan and couldn’t wait to introduce The Fox and the Hound to Bug.  We were able to review the Blu-ray combo pack.  It comes with both The Fox and the Hound and The Fox and the Hound 2 on blu-ray and DVD. Bug has immediately fallen in love with both movies.  He has been watching them over and over and can’t seem to get enough. He has been saying “I’m a hound dog” a lot and it’s so cute :). I really enjoyed watching the first again as it had been a while since I had seen it.  Neither of us had seen the second one and we enjoyed it as well.  This is a must have to add to your family movie collection!

“Further engaging fans and families beyond the story itself, Disney has included five unique bonus features that provide consumers with the ability to further immerse themselves in the storyline, its history and characters themselves with an entertaining look inside the fascinating collection of unlikely friendships in the animal kingdom, Disney’s historic and legendary animators, the making of the music and more.  They are as follows:

Bonus Features:
Blu-ray Disc:
·       Unlikely Friends:  A fun and fascinating Collection of Unlikely Friendships in the Animal Kingdom (ALL-NEW) — Friendships know no boundaries.   They can occur across country lines, be shared among
young and old and even develop between different species!
DVD’s:
·       The Fox and the Hound:
o    “Best of Friends” Sing-A-Long – Viewers are invited to sing along with Pearl Bailey on this Walt Disney Classic Song.
o      Passing the Baton:  Making of The Fox and the Hound – This feature allows fans to take a deeper look at this little bit of Disney history as legendary animators hand over the reins to a new                       generation.
·       The Fox and the Hound 2 :
o   “You Know I Will” Music Video – High School Musical Star Lucas Grabeel sings this end-credit song.
o   The Making of the Music – Music is the center stage in The Fox and the Hound 2.  As such, this feature showcases how the songs in the film were created with Reba McEntire, Trisha Yearwood and some of the hottest performers in Nashville.  Viewers will further discover how animation and music work together to further enhance a classic story.”-Disney 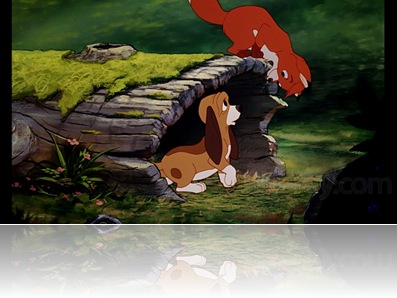