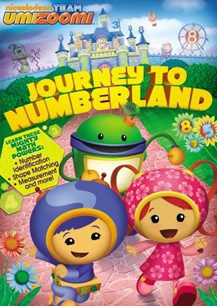 My daughter has recently discovered Team Umizoomi from Nick Jr. and she loves it! Her favorite character is Milli who can make any pattern with her dress. She will sing the songs and say patern Power, every single time! So when I heard that Team Umizoomi: Journey to Numberland DVD was being released I couldn’t wait to review it for Leah.

Leah starts preschool this week and what better way to start it then with some fun Team Umizoomi! She can learn numbers, patterns, shapes, and other fun math problems!

“Preschoolers can join Milli, Geo and Bot on exciting math adventures with the DVD release of Team Umizoomi: Journey to Numberland, available on Sept. 6, 2011. In this special DVD, the Umi Team must identify shapes, build a super flashlight to find a Brachiosaurus, figure out missing numbers in a sequence and complete other math missions. A one-year free subscription to Parents magazine is also included in the DVD for a limited time only. Created by Nickelodeon Home Entertainment and distributed by Paramount Home Entertainment, the Team Umizoomi: Journey to Numberland DVD will be available for the suggested retail price of $16.99.

Team Umizoomi features a tiny team of superheroes, Milli, Geo and Bot, who use their mighty math powers to help little kids solve big problems. The series combines action-adventure missions with an interactive math curriculum designed to help kids develop self-confidence in their math abilities and appreciate the many ways in which math shapes their world.

The Umi Team is not complete without their Umi Friends (home viewers), who help the team along the way while practicing various math skills. Set to a soundtrack of preschool-friendly pop songs, the series is designed to build upon preschoolers’ conceptual understanding of math as they are exposed to core mathematical concepts like numbers, counting, computations, measurement, patterns and shapes.

King of Numbers (Double Length Episode)
The Umi Team goes to visit the King of Numbers in his magical Number Kingdom, but the anti-math wizard, Zilch, locks the king in his tower. All the numbers start to disappear and it’s up to Team Umizoomi to save the king and his kingdom.

The Great Lunchbox Chase
The team is packing snacks for a rooftop picnic lunch with their friend Anna when Sarah calls in an Umi Alarm. Sarah left her lunchbox on the school bus and all the picnic sandwiches are inside. The team saves the day by building a super helicopter, chasing down the bus and retrieving the sandwiches.

Dinosaur Day
It’s Baby Dinosaur Day at the museum and the team is getting ready to go when Mouse sounds the Umi Alarm. Thunder scares all the dinosaurs out of the museum and they scatter all over Umi City. It’s up to Team Umizoomi to locate and rescue each frightened dinosaur before the museum reopens.”

Team Umizoomi: Journey to Numberland DVD will be out on September 6th and you can visit shop.nick.com/teamumizoomi to find out where you can purchase this great DVD! 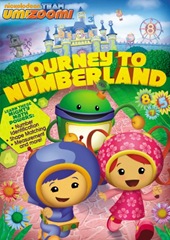