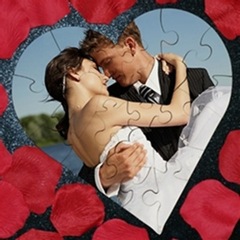 Anniversary Rose is a great website to find everything that you need for wonderful and creative Wedding gifts.  I have a really hard time finding something for my husband not only for our anniversary but for his birthday and Valentines too.  He always says he doesn’t want anything, but we all know that isn’t true right?
When we were dating I would do all sorts of cute fun things, like leave hearts around his apartment with notes on them or make him a cute mug with our 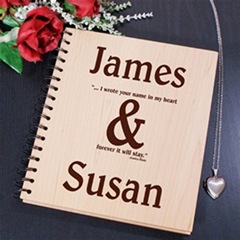 picture on it, tell him 100 reasons why I loved him etc. Well now that we are married it is so much harder! But Anniversary Rose is a great place to find everything you need to spoil that special someone in your life!
I really like that they not only have traditional anniversary gifts but they also have ones that I would never think of! They have a great selection of gifts for men, women and even kids! A lot of the items I found can also be personalized for that special person. I fell in love with the above photo album. It can be 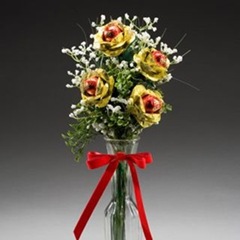 personalized with your names and inside you can add tons of pictures!
Anniversary Rose also puts things into Anniversary years. So I was curious and looked up our anniversary coming up which will be our 4th and there are tons  of different ideas for that year. I didn’t realize it was the year that you traditionally give fruit, they have a fruit rose bouquet that can be given as a gift. There is a whole section called the Gift Guy that tells about each anniversary and gives some great ideas.
There are also some really creative, fun gifts like photo mugs that intertwine, aprons and some really cute signs. They are definitely the perfect place to find all your anniversary gift ideas.

View Full Album
All of these items and more can be purchased at www.theanniversaryrose.com
The Anniversary Rose gets Bragging Rights!