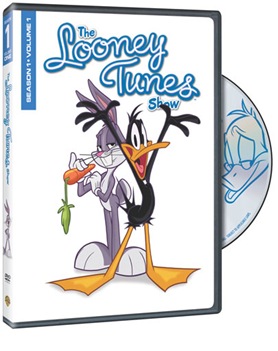 Appealing to a New Generation of Viewers

“What happens when Bugs Bunny and all his legendary Looney Tunes pals undergo a 21st century makeover? The result is The Looney Tunes Show, a hilarious new animated comedy series from Warner Bros. Animation which premiered in May on Cartoon Network and is now being released on DVD September 27, 2011, by Warner Home Video (WHV). Titled The Looney Tunes Show Season 1 Volume 1, this release will feature a selection of laugh-out-loud animated episodes from the new TV series and will retail for $14.97 SRP.

In The Looney Tunes Show, screen icons Bugs Bunny and Daffy Duck return in this all-new modern comedy series, joined by fan-favorite Looney Tunes characters. Bugs and Daffy haven’t changed — but their living situation has. Bugs is as brazen, sarcastic and ahead-of-the-game as ever, and Daffy, despite his narcissistic, sociopathic and paranoid tendencies, is Bugs’ best friend and seemingly permanent houseguest. No longer confined to seven-minute shorts, their larger-than-life personalities (and egos) offer an irreverent, comical take on our modern world and introduce a whole new realm of possibilities. Now Bugs and Daffy can wreak as much havoc at the grocery store or the DMV as they once did in the forest.”

I was a huge Looney Tunes fan as a kid (and I’ll admit I still am). I was so excited to introduce the Looney Tunes to Bug.  He thinks this show is hilarious!  We are so excited to have 4 of the great episodes on DVD.  Now Bug can watch them whenever he wants! 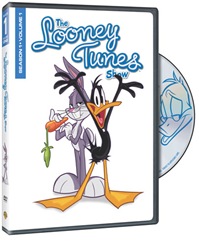 “The Looney Tunes Show Season 1 Volume 1 brings classic Looney Tunes to a brand-new generation of viewers and, while it stays true to the original cartoon, the look of the characters has been streamlined and updated with cutting-edge animation for a fresh and contemporary feel,” said Mary Ellen Thomas, WHV Executive Director Non-Theatrical Franchise. She added, “These characters have been with us for decades and it’s wonderful to see them continue evolving. We think both classic Looney Tunes aficionados and newer viewers will embrace The Looney Tunes Show. It’s a must-have DVD for anyone who appreciates great animation.”