“In modern day Japan, Wolverine is out of his depth in an unknown world as he faces his ultimate nemesis in a life-or-death battle that will leave him forever changed. Vulnerable for the first time and pushed to his physical and emotional limits, he confronts not only lethal samurai steel but also his inner struggle against his own immortality, emerging more powerful than we have ever seen him before.” -Twentieth Century Fox 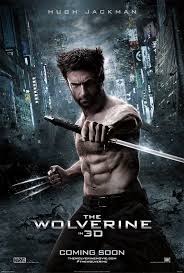 Before I can even begin a word of caution; do not see this in 3D. It takes away so much from the scenery and the action sequences and adds nothing whatsoever to the film. The 3D effects were an afterthought, and it shows. Seriously, don’t do it.

Now that I’ve got that off my chest, let’s get onto the rest of it. Wolverine has always been a favorite among all comic goers. The Last Wolverine movie however was not. The Wolverine is a significant improvement, Hugh Jackman has Wolverine down and there is never a question as to whether or not Wolverine is being portrayed properly. The film starts with Wolverine alone in the forest, trying hard to forget who he is. With flash backs of Japan and moments in dreams where Jean Gray makes an appearance the scene is set. Wolverine is trying to find himself while denying who and what he is.

One cannot properly explore Wolverine without delving into the Japan story-arc. Thankfully this was fairly well done. There are some changes to character back stories; some of these very well done, other parts are done to a point that there could be some political stabs that are done between the lines. If you aren’t familiar with the comics it really doesn’t matter as the characters are done well; if you are it’s an interesting take on organized crime.

Viper debuts as the villain that she is but there is much about her that has been changed. It reminds me of reintroducing a 70’s muscle car as a family sedan 30 years later. Sure they both have the same name and maybe a few of the same specs but are they really the same? Of course not. Other that, Sventlana Khodchenkova does a stand up job.

The Wolverine has some very slow character developing sections and some action packed sections that are spectacularly done. The ending is a bit predictable but very enjoyable. Overall this movie was a significant improvement over the last one. Honestly worlds better. The special effects are well done and the characters are thought out and developed for the most part. That being said, it could have been better. There isn’t much chemistry between the love interests and it makes it hard to really care about and get behind them in much of the movie. Taken alone the characters are great, together, there’s something lacking.

Being that this is a Marvel movie, don’t leave until the credits are done rolling and the bomb is dropped. There is only one teaser during the credits, but it’s pretty good. Don’t miss it.

The Wolverine is rated PG-13 and is now playing in theaters. Visit the official website www.thewolverinemovie.com