FOLLOW THE POPULAR CAT AND MOUSE DUO OVER THE RAINBOW AND DOWN THE YELLOW BRICK ROAD IN WARNER HOME VIDEO’S ALL-NEW ANIMATED FAMILY FILM:

“Move over Munchkins! Tom and Jerry have landed in Oz and are gearing up for an unforgettable adventure along with Dorothy, Toto and other beloved characters in Tom and Jerry & the Wizard of Oz, Warner Home Video’s (WHV) brand-new animated film, available August 23, 2011. Prepare to take a fun-filled journey into the magical Land of Oz with the dueling duo in this “Ozsome” original movie that features an all-new animated re-telling of the classic tale. Produced by Warner Premiere, Tom and Jerry & the Wizard of Ozis available on DVD for the first time. The release will retail for $19.98 SRP for the standard DVD edition and $24.98 SRP for the Blu-ray combo pack, which includes both the Blu-ray and standard DVD editions. 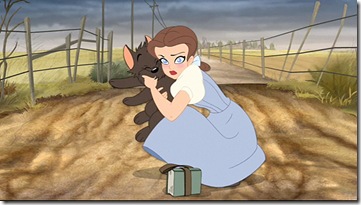 In this captivating story, Tom and Jerry are twisted up into a powerful tornado, soar over the rainbow and down the yellow brick road, where they encounter some of the legendary story’s most cherished characters including Dorothy, her little dog Toto, the Scarecrow, the Tin Man, the Lion, the Wizard and many others. The cat and mouse team go paw to paw against a legion of flying monkeys and set out on a dangerous quest to storm the Wicked Witch’s castle in a heroic attempt to return Dorothy and Toto safely back to Kansas, because after all, there is no place like home! This exciting new story is full of heartwarming and hilarious moments, and beautiful songs, including the memorable, Over the Rainbow.

“We’ve taken two classic favorites and combined them to create a totally new and original film that’s perfect for family viewing,” said Jeff Brown, WHV Executive Vice President and GM of Non-Theatrical Franchise. He added, “Tom and Jerry & the Wizard of Oz is an entertaining adventure that brings all the fun and hilarity of Tom and Jerry’s zany antics into a timeless tale loved by generations. This is the perfect follow-up to Tom and Jerry Meet Sherlock Holmes, which was well received by viewers last summer. We are delighted to bring consumers new and exciting productions like Tom and Jerry & the Wizard of Oz.” 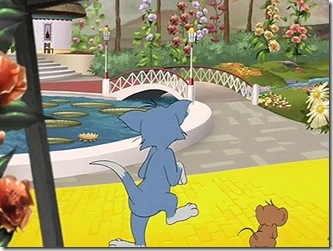 Originally created by William Hanna and Joseph Barbera, Tom and Jerry emerged during Hollywood’s golden age of animation and became one of the most popular cartoon series in existence. The shorts focus on the never-ending rivalry between Tom the cat and Jerry the mouse. The plots of each short usually center on Tom’s attempts to capture Jerry. Jerry however, is clever and quick on his feet so Tom hardly ever manages to catch him.

The Wizard of Oz is one of the most recognizable brands in family entertainment. Metro-Goldwyn-Meyer’s 1939 film adaptation starring Judy Garland not only became one of the best-known interpretations of the classic novel but also originated some of the most unforgettable music of all time.  Tom and Jerry & the Wizard of Oz features many of the same beautiful songs that were made famous by Garland, interpreted by teen Jazz recording artist Nikki Yanofsky. Other featured talent includes Larraine Newman (Saturday Night Live, WALL-E), Francis Conroy (Six Feet Under) and Stephen Root (King of the Hill).”

This movie is a hit with the whole family!  We all love sitting down to watch Tom and Jerry and The Wizard of Oz is also a family favorite.  So to see the two come together was very fun and entertaining.  The kids have been watching this regularly since it arrived.  I recommend this as an addition to your family’s Blu-ray & DVD collections!

TOM AND JERRY & THE WIZARD OF OZ is now AVAILABLE on Blu-ray & DVD in stores and online.

Tom and Jerry & The Wizard of Oz gets Bragging Rights!