Becoming a parent was such a wonderful experience.  I have loved every moment with my kids.  But I do have to say that I didn’t realize all of the icky situations being a parent would put me in.  Clorox has just come out with the Clorox Ick-tionary.  Yes, they are putting names on some of parenting’s biggest messes.  This post is sponsored by Clorox.

“One icky catastrophe can easily turn into a hilarious party story or top-ick of parent-to-parent chatter. The Clorox® Ick-tionary captures the icky every day and over-the-top situations that everyone can relate to; from circumstances surrounding the unpleasantness of life’s #1’s and #2’s (and sometimes #3’s) to things like applesauce on the ceiling (how?). This online, interactive forum at www.icktionary.com officially brings together the new language of mess, including how to conquer and laugh about them, all brought to you by ick survivors and parents who have been there and cleaned that.” 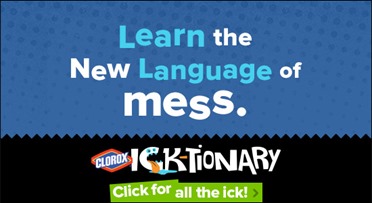 I had the opportunity to team up with Clorox and come up with a term of my own, here is what I came up with: "Smeargers:  When your children smear their boogers and other unidentifiable slime on your counters."

Yep, it happens. It never ceases to amaze me how dirty little hands can be, and all the prints of slime and go they will leave around the house.  And it isn’t even just the counters it seems to be everywhere.  On the walls, the doorknobs, your smartphone, everywhere!  If you haven’t found a Booger on your wall, then you aren’t a mom to a 4 year old boy!  So wrong and so gross!  My son has a fascination with my smart phone.  He has 2 tablets, an iPod touch, and a Nintendo DSi, yet he still wants to play MY phone.  I don’t mind sharing it, but every time he hands it back it’s covered in goo.  It grosses me out, yuck.

Yes, kids hands seem to be covered at all times. Even when I was their hands, a few minutes later they are slimy again.  Do they have a secret slime bucket they go dip their hands in after a washing?  “Come on sis, mom just washed our hands, better go dip into the slime again”.  Or maybe tiny hands just regenerate goo? LOL!  However they manage it, and it remains a mystery to me, it makes a mess.  Luckily I keep Clorox wipes handy so that I can wipe the slime away knowing the germs are leaving too.  Now if they could just invent some type of child glove that made it impossible for goo to stick too….a mom can dream!

What terms can you come up with for the icky moments parenting has brought you?

This blog post is part of a paid SocialMoms and Clorox blogging program. The opinions and ideas expressed here are my own. To read more posts on this topic, click here.