Disneyland really is the Happiest Place on Earth.  I love every time I visit.  I have been so many times as a child and as an adult but even I didn’t know some of the Disneyland secrets… Have you noticed the hidden Mickey’s when you are at Disneyland?  Most likely you have seen a few. There are literally thousands hidden all over the park, even inside the rides.  Watch for them on your next trip and see how many you can spot.

If you were lucky enough to visit Disneyland when the Country Bear Jamboree was showing you may spot some familiar faces in the Winnie the Pooh ride at Disneyland.  When you enter the room where Pooh is eating honey from a honey pot turn around and you will see Buff, Max, & Melvin from the Country Bear Jamboree.  Since the Winnie the Pooh ride took the place of the Jamboree it looks like these three weren’t ready to leave and have found a permanent home here, hidden where most won’t see. While waiting in line for Indiana Jones you may spot something that doesn’t fit it.  It is an Eeyore sign from the old Disneyland parking lot.  The Indiana Jones ride was built over the Eeyore section of the parking lot.  So Disney put this parking lot sign in as a tribute.  it is in the projector room up high and may take some light (or flash) to see.

Riding in the Front of the Monorail

Did you know there are 100’s of Feral Cats that live at Disneyland? These felines are there to help control the mouse population (except for Mickey and Minnie of course).  While the cats are off the clock, Disney feeds and waters them and even provides shelter for them.  They mainly come out at night once the park guests are gone.  If you are lucky you will spot one on your next visit like I did!  Check out my video:

Before you board ask a Cast Member if you can drive the boat.  If you are lucky they will take you to the wheel house where you can steer the ship, ring the bell and sign a special guest book of the drivers before you. 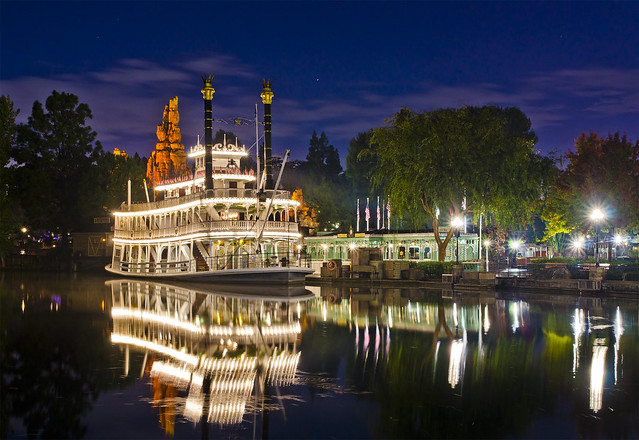 Did you know there is small (very small) basketball court inside the Matterhorn?  Yep there is.  This attic like space in the top of the Matterhorn is used for the costumed cast member climbers who are waiting to make their appearance (think: Tinkerbell during the Fireworks, and when they had Mickey and Goofy climbing the Matterhorn years ago).  It is said that this basketball hoop was installed to give these cast members something to do while they waited.

The Grand Ballroom of the Haunted Mansion ride has large glass panels, As you near the end of the Ballroom (left side) you will see a spider sitting on a web.  Look closely and you will see that the spider is covering up a bullet hole that cracked the glass.  The legend is that someone fired a gun at the glass.  Instead of Disney replacing the large piece of glass they decided to use it as a spider web.

You may not realize it but the late Thurl Ravenscroft’s is a voice you will hear all over the Disneyland park.  He voices the Train Conductor when you ride the Disneyland Railroad, he is Fritz the parrot and a Polynesian god totem in the Enchanted Tiki Room, he sings the song “Grimm Grinning Ghosts” in the Haunted Mansion Ride, and several voices of Pirates in the Pirates of the Carribbean ride.  His voice is a popular one at Disneyland.  On a non-Disney note, he also voices Kellogg’s Frosted Flakes Tony the Tiger and sings the song “You’re a Mean One Mister Grinch” in the How the Grinch Stole Christmas cartoon from 1966. Capture all the Disney secrets with Tamron.