“Pack your suitcases and renew those passports! Tom & Jerry: Around the World is your first-class ticket to an entertaining, globe-trekking adventure. An exciting voyage with the popular cat and mous 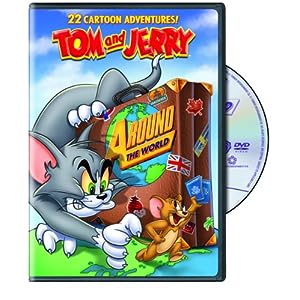 e duo awaits in this 22-cartoon collection consisting of classic theatrical shorts and episodes from Tom & Jerry Tales.  It’s Bon Voyage for Tom and Jerry as they duke it out as competing streets performers in the Big Apple in Way-Off Broadway. Tom chases Jerry through the streets of Naples in Neapolitan Mouse. In Flamenco Fiasco, the dueling duo find themselves in Spain where Tom shows off his fancy footwork as he engages in a very competitive Flamenco dance competition.  It’s a trip Down Under in Kangadoofus where Jerry takes refuge with a kangaroo mother and her joeys in an effort to ditch Tom.  In Freaky Tiki, it’s “Aloha” for Tom and Jerry as they relax on a Hawaiian beach and find themselves entering an active volcano where they encounter Pele, the goddess of flames. Next it’s off to Tinseltown where Tom conducts a symphony orchestra in Tom & Jerry in the Hollywood Bowl. These and several other captivating adventures are featured on this must-own release.”

I have always been a big fan of the Tom and Jerry cartoons.  My favorite is Jerry, he is so cute.  I was ready to sit down and watch a few hours of Tom and Jerry hijinks.

At first, I did not realize that a majority of this DVD was mostly the updated tales of Tom and Jerry.  I am excited that they are introducing Tom and Jerry to a new generation but my favorite shorts on the DVD were the older, classic ones.

A few episodes stood out as my favorites.  I really enjoy the short Invasion of the Body Slammers.  An alien Jerry comes to earth and creeps out Tom.  This short had me laughing outloud several times.  I will even admit, the alien Jerry was a bit creepy.  I also really enjoyed Kangadoofus.  Jerry disguises himself as a baby kangaroo in order to get away from Tom.  This episode was just darling.  My other favorite was a classic cartoon called Johann Mouse.  Tom and Jerry actually somewhat work together on this one as a piano playing cat and a dancing mouse.

If you are looking for a fun DVD to entertain the little ones and even renew some of your own childhood memories, Tom and Jerry: Around the World is a great addition to your family’s movie collection.

Tom and Jerry:  Around the World is has landed now on DVD with Ultraviolet Digital Copy.  You can buy it here in the WB Shop or in stores everywhere.